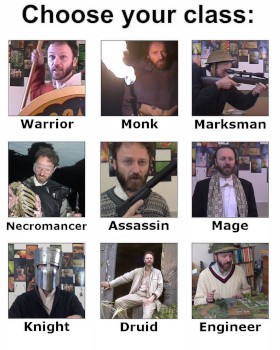 Nikolas Lloyd runs the YouTube channel Lindybeige. He has in his time been a wargamer, re-enactor, LARPer, fencer, experimental archaeologist, HEMA practitioner, and enthusiast of ancient and medieval warfare. Recent projects of his have involved forging his own sword, and putting together his fifth suit of armour.

‘Lloyd’ (as he is usually known) plans to give us a demonstration on the use of the one-handed spear (with shield). Other mooted topics for talks include the Second Punic War, the reasons Hollywood gets it all wrong, and the lessons we can learn from the various different hobbies which all purport to simulate pre-gunpowder fighting (although if anyone asks, he also knows a fair amount about tanks). 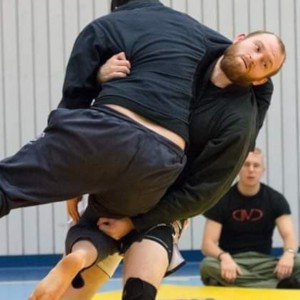 Having begun training Liechtenauer longsword, Peter Smallridge began cross training in mixed martial arts in order to better understand the often neglected grappling range of a sword fight.
He enjoyed it and got a bit carried away. Seven years later, he has a BJJ purple belt, is a member of the Dog Brothers Tribe of stick fighters, and has medalled in Ringen at four out of five Swordfish events he has attended. The exception was when he ran the Ringen tournament.
His favourite takedown is the outside trip. His favourite drink is espresso. His biggest fear is the possibility that love is not enough.

Foundations for Grappling
Aimed primarily at those with minimal or no grappling experience, but an option for experienced grapplers who want a warm-up, this workshop is a preparation for those looking to work on wrestling – whether for Auerswald’s Ringen or other historical grappling systems.
We’ll address the basics of grappling, including applicable exercises to build the required physical attributes, as well as technical knowledge ranging from breakfalls to the principles of balance and base.

Auerswald at Arm’s Length
An introduction to Ringen, we’ll be working primarily from the 1539 manual ”Ringer kunſt: fünff und achtzig ſtücke” by Fabian von Auerswald, beginning from the ”Zufechten” and exploring strategies for taking grips and dealing with an opponent’s grips, working through arm drags to entries for body locks, leg trips and takedowns.
If you have them, please bring a mouth guard, groin guard, and jacket. If you don’t have a grappling jacket (either Ringen or judo/jiujitsu) then no problem. You could wear a hoody you’re willing to risk getting torn, or there will be no-clothing-grips versions of everything. If you go that route, try to avoid wearing a baggy t-shirt. 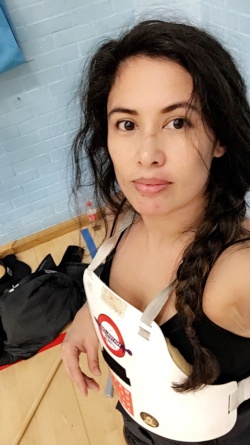 Francesca Lacuata is lead instructor at The School of the Sword’s Godalming chapter, having studied Bolognese swordplay and rapier since 2010. She has a further interest and some experience in renaissance dagger-fighting, Bartitsu and longsword. Fran has instructed at several high-profile events in Britain, Europe and the US; and has placed in and won a number of international tournaments.

As a writer, Fran has demonstrated, panelled and presented on historical fencing and real-world violence at various lectures and writers’ conventions, including Fantasycon and at the Wallace Collection.

She was a main organiser of the International Rapier Seminar 2016; co-founded Waterloo Sparring Group in 2012, which facilitates inter-group sparring from clubs all over the south of England and beyond; is a main committee member for the Wessex League series of events; is a key organiser of the Albion Cup; runs the Spring Sword Workshops and Swords of Winter events; organises By The Sword – an annual women’s event running since 2017; and is a founding member of Esfinges, a worldwide organisation for women in HEMA.

In the first part of this workshop we are going to look at some basic principles as laid out by Dall’Agocchie on how to use the sword and dagger. We will also cover some of the main guards used in the Bolognese school.

In the second part we will look at application of these principles in Manciolino’s assalti, or situations where these principles and techniques can be applied. Manciolino also gives very clear advice on footwork – his main principle is to be always stepping offline to put your opponent at a disadvantage. 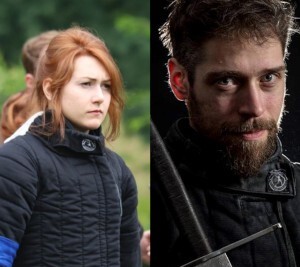 Izabele Saorin started training Longsword at Zwaard & Steen in the end of 2017 and became very passionate about it in no time. Motivated by the challenge of becoming a good fencer and acquire more experience she started participating in tournaments such as the Dutch Lions Cup and Swordfish.

Michel Rensen started training at Zwaard & Steen in 2013, and little more than a year later he started the process to become a trainer at the club. He became a trainer about a year after that, and by now he teaches every week at the club’s Rotterdam branch. Besides teaching at Zwaard & Steen, he also regularly gives workshops, both in the Netherlands and abroad. He also often competes in tournaments.

In this workshop we would like to introduce our idea of a problem-solving mindset and how it can be used during the learning process. The idea is to use a structured approach to evaluating yourself during training aiming at continuous improvement. During the workshop we will be applying this approach to the Meisterhäue in more realistic situations such as sparring, breaking down the results and evaluating them in terms of effectiveness and historical accuracy. You can expect a very dynamic workshop full of debate. The target audience is everybody looking to improve their fencing skills regardless of their current level. 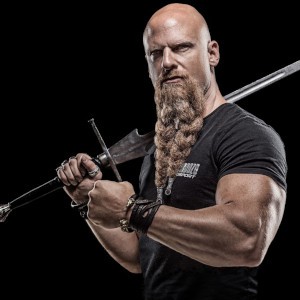 Mishaël Abia Lopes Cardozo (*1972) picked up his first longsword in 1992. He is founder and president of the AMEK. The company focusses on HEMA, events and film and was officially founded in 2002. Cardozo Swordsport, part of AMEK has currently five locations in the Netherlands with a total of 150 students. In 2008 Mishaël started to teach internationally. He has taught all over the world and continues to do so. His focus is on the 15th century German fighting tradition and, secondarily, Italian dagger and wrestling.
His other specialisms are biomechanics and flow drills with one- and two handed weapons. On July 12th 2008 Mishaël was officially knighted in Holland for his contribution to the reconstruction of the historical European martial heritage in the lowlands. In 2010 he initiated and co-founded the HEFFAC, a lowlands HEMA Alliance, consisting of clubs from Holland and Belgium, which lead to the first HEMA union. In 2014 Mishaël was elevated to the Hall of Fame for Martial Arts.
Mishaël makes his living as a swordsman. He is a fierce tournament fighter, won numerous medals and trained some of today’s best fighters. Besides being a HEMAist, he is a musician, painter of fine arts and actor and does motion capture for computer games. He played in – among others – ”Richard the Lionheart” (Lionsgate), the mega series ”Game of Thrones” and has now scored a formidable role in the 6th season of ”Vikings”. He has no wife or kids and still out-parties most teenagers. He resides in Haarlem Netherlands. Watch his demo video, if you like!

In this workshop you get to execute some groovy action-packed dagger techniques from the Dutch fighting manual PBL 3281. These out of the ordinary counter solutions to dagger attacks are not to be found in any other fighting manual thus far. The techniques have a very contemporary feel to them. They’re fast, efficient and extremely cool to practice. 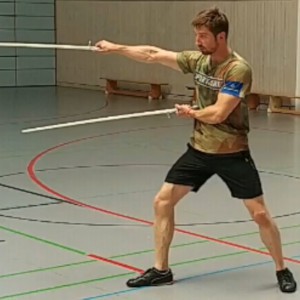 Jan Gosewinkel is trainer for Montante, Mangual and the fight with two swords at the ”Bonner Schule” martial arts school.

Jan started training in martial arts 27 years ago when he joined the local Jiu Jitsu club. He practiced it for more than 20 years earning the second Dan. After some shorter excursions into Tae Kwon Do and Kung Fu, he took his first steps in HEMA during 2006/2007. During the following years he practiced in several HEMA clubs like ”Ars Gladii” in Dornbirn, ”Schwertkampf Osnabrück”, ”Krîfon” in Edingen, ”Schwertfechten Nordhessen” in Kassel and ”Frequens Motus” in Bad Godesberg. He visited HEMA clubs in Sweden, Luxemburg, Spain, Austria and all over Germany.

Jan founded the HEMA scetion of the police sports club in Unna in 2009 with his focus on the Liechtenauer longsword and the ”Short Sword for Combat” (Sword in Harness), but in addition he already started research and practice for the Iberian Montante. Since 2011 his focus here has been on the teachings of Luis Godinho. From 2014 to 2017 he worked as an instructor for longsword and Montante in Kassel, founding the first regular Montante training group in the German-speaking countries at ”Schwertfechten Nordhessen”. Meanwhile, he also translated all Spanish sources on the Montante known to date into German. Since the middle of 2017 he is head instructor for Montante and also responsible for the related topics of Mangual and fighting with two swords at the ”Bonner Schule für Kampfkunst”. Jan has been giving workshops on the Montante and other topics at HEMA and martial arts events in Germany and abroad since 2012.

The workshop deals with the Spanish dual wield system of Luis Godinho (1599), which is closely related to his teachings of the Montante. Two side swords or rapiers are used to defend oneself against a surplus of opponents in various tactical situations.

Specific technical knowledge is not necessary. However, since the topic is very demanding (!) in terms of coordination, a pronounced feeling for body and blade as well as the ability to coordinate complex movements should be possessed. 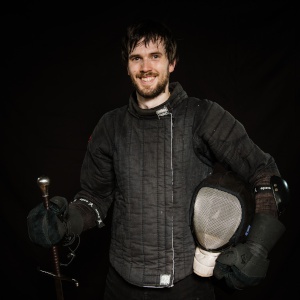 Matthew Malcolm has practiced HEMA since 2011 and has been teaching since 2012. His area of interest is the German longsword from 14th and 15th century sources: particularly Sigmund Ringeck and the Nuremburg Hausbuch. His main interests are teaching and technical application.
He is the founder and longsword instructor of Medieval Combat Group, and a founding member of HEMA Ireland, acting as its Health and Safety Officer in its first 2 years.
Matthew has taught at Féile na Gaiscígh 2014 and presented longsword interpretation at Borderlines XIX and XXII medieval conferences at Queen’s University Belfast. He has success in national competition reaching the semi-finals of FightCamp’s Eggleton Cup 2012 and SWASH 2013, and placing 1st in three out of four Irish Historical Fencing League 2016 events.

Meyer on Nachreisen / Travelling After:
This is an especially good handwork, and who is well trained and knows well how to use it may justly be called a master. And the proceedings of Travelling After are thus: When your opponent starts to move his sword above or below himself or strikes too far outside, you rush at his openings and thus preemptively intercept his strike. All of which can and may then fittingly be used against those who swing their strikes around themselves expansively.

Timings vary by a fencer’s attributes, reaction times, and other factors; but in principle if you catch your opponent while they are doing something else, you have a much better chance of succeeding in your attack.